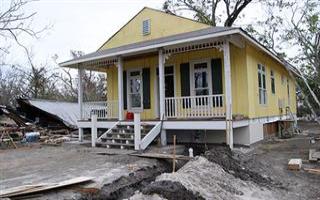 SHREVEPORT, LA - This year marks the fifth anniversary of Hurricanes Katrina and Rita. It is also the fifth anniversary of The Fuller Center for Housing, a non-profit that jump-started its affordable housing ministry in December 2005 by building houses for low-income hurricane victims who fled to Shreveport. The two storms damaged more than 200,000 houses and displaced more than one million people in Louisiana.

The Fuller Center is a post-Katrina success story. Its work in the Allendale neighborhood, alongside Community Renewal International, is transforming the previously crime- and drug-ridden part of downtown Shreveport. The local Fuller Center partner has built or repaired 75 houses, providing simple, decent shelter for almost 200 people in Allendale.

Since The Fuller Center began building in 2005, crime has dropped in Allendale 55 percent. Emergency phone calls from the areas where Fuller Center houses are clustered have dropped nearly 90 percent.

In 2010, a grocery store will open in Allendale, encouraged by the Fuller Center's success. The nearest store with affordable, fresh food is currently ten miles away, making shopping difficult for elderly residents and those without cars. There is also a new playground for children and a community garden now tended to by several residents.

"Many years ago this was one of the worst communities in the city. Homicides, crime, gang activity – you name it," said Jewel Mariner, a community coordinator in Allendale. "It's amazing to see the transformation in people's lives and in this neighborhood. People used to just call this The Hill. Now it's New Hope Hill."

The Fuller Center is celebrating its fifth anniversary and the ongoing success of the Allendale project by returning to Louisiana between March 15 and 27 to build five houses with its three local partners – Shreveport, Hammond and Webster Parish.

The Fuller Center for Housing is an ecumenical Christian non-profit started in 2005 by Habitat for Humanity founder Millard Fuller as a way to continue his vision of a grassroots movement working to eliminate poverty housing worldwide. The Fuller Center is based in Americus, Ga., and is currently working in nearly 60 U.S. cities and 17 countries. Visit www.FullerCenter.org for more information.
Source: Fuller Center For Housing