ULI Names Project of The Year 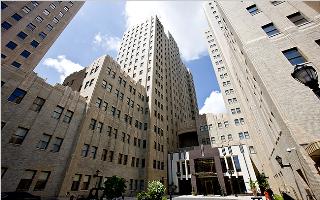 JERSEY CITY, NJ - The New Jersey District Council of the Urban Land Institute (ULI-NNJ) has awarded The Beacon its 2009 "Project of the Year" honor in recognition of the ongoing transformation of the former Jersey City Medical Center into successful mixed-use development that is currently the largest residential restoration project in the country and the largest in the history of New Jersey. The award was presented to developer Metrovest Equities during the annual Leadership in Land Use Awards held at the Heldrich Center in New Brunswick, N.J. on December 10th. Previous recipients of this prestigious award include the Borgata Hotel Casino and Spa in Atlantic City and Pier Village on the oceanfront in Long Branch.

"The award winners exemplify ULI's mission to provide leadership in the responsible use of land and in creating and sustaining thriving communities," says Lawrence Jacobs, Esq., chair of the ULI-NNJ. "Each of the award winners has taken steps beyond industry norms to advance goals of smart and sustainable development. The winners show a commitment to successful development in New Jersey that is also mindful of societal goals."

Situated on a rise in the center of Jersey City, The Beacon is a cluster of ten art deco buildings built in the 1930's during Frank Hague's reign as Mayor. The elaborate complex included such architectural and designer trappings as marble walls, terrazzo floors, etched glass, decorative moldings and glittering chandeliers, and had one of the most famous maternity wards in the country - the Margaret Hague Maternity Ward. Overbuilt and understaffed, the complex closed down in 1988.

Metrovest Equities was designated the redeveloper of the property in 2003, and began a massive recycling and adaptive reuse effort executed under the Secretary of Interior's Guidelines for Historic Rehabilitation. Today, the developer is well on its way to converting the 14-acre site and federally landmarked buildings into a "City within a City" that, when completed, will contain two million square feet of residential and retail space, including 1,200 luxury residences and 80,000 square feet of retail space.

"The Beacon is perhaps the most important development in Jersey City as it demonstrates that you can successfully redevelop outside of the small band of property along the waterfront," stated Robert Antonicello, Executive Director of the Jersey City Redevelopment Agency. "George Filopoulos recognized that these buildings not only possess tremendous historical and architectural significance, but also hold a special place in the hearts of Jersey City residents. As such, he thoughtfully restored them to their original grandeur while also integrated modern amenities and services to create a world-class residential property."

The Beacon's initial phase, The Rialto and Capital buildings, feature 315 condominium homes that are more than 90% sold and occupied, as well as 45,000 square feet of completed interior amenities. The second phase, the 17-story Mercury Lofts building, recently opened sales with 25 half- and full-floor lofts offering from 2,994 to 6,665 square-feet. The unique loft building has received a Live/Work designation. Work is also underway on creating 66,000 square feet of onsite retail space which will be devoted to children's education and recreation including early childhood learning and sports training.

"We're delighted to receive this prestigious honor from ULI which is an affirmation of The Beacon's standing as an architecturally- and historically-significant landmark worthy of preservation," notes George Filopoulos, President of Metrovest Equities.

"This ambitious process, led by our talented and committed project team and a host of skilled professionals and consultants, has resulted in a viable new use for an underutilized property that has already yielded significant economic benefits to the City, helped spearhead new revitalization efforts in the area and created a truly unique living experience for more than 500 residents to date."

The Beacon's existing buildings, which are listed on the New Jersey State and National Register of Historic Places, are the largest concentration of Art Deco buildings in the state. Metrovest has assembled the finest team of craftsmen and historic preservationists in the region to execute the restoration. The historic grandeur of the interior has been immaculately restored by refurbishing and preserving the original chandeliers, marble, terracotta details, terrazzo flooring, brass elevator door surrounds and windows, and utilizing historic paint analysis to match gold and silver leafing to the original colors schemes.

Former Art Deco theaters, lobbies, and public corridors have been converted to elaborate private amenity spaces for residents, including a billiards hall with a massive stone Bas-relief chronicling the history of medicine.
Source: Metrovest Equities