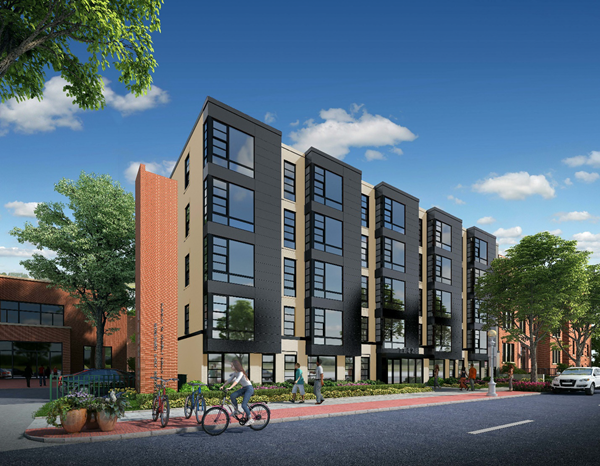 WASHINGTON, DC - The District of Columbia Housing Finance Agency (DCHFA) closed out the month of June by financing the construction of Shepherd Park Apartments. DCHFA issued $16.3 million in tax exempt bonds and underwrote $1.8 million in Low Income Housing Tax Credits for the construction of 66 new affordable apartments at 7428 Georgia Avenue NW in Ward 4.

“Every deal that the Agency closes creates more affordable housing for District residents and brings us closer to meeting Mayor Bowser’s goal of developing 12,000 new affordable units by 2025. As a Ward 4 resident, the development of Shepherd Park Apartments is of special interest to me and I look forward to watching the construction of this new community,” stated Christopher E. Donald, Executive Director/CEO, DCHFA.

Additional financing for Shepherd Park Apartments will be provided in the form of an $11.7 million loan from the DC Department of Housing and Community Development’s Housing Production Trust Fund.

The residents of Shepherd Park Apartments (7428-7434 Georgia Avenue Tenants Association) exercised their rights under the Tenant Opportunity to Purchase Act (TOPA) to obtain the property. The tenants selected Lock 7 Development to lead the $33.7 million redevelopment that will include the demolition of 3 two-story apartment buildings with 13 apartments currently on the site. The developer’s agreement includes a relocation and return plan for the current tenants. All the tenants have successfully been relocated at this time.

Lock 7 intends to replace the existing buildings with a new 66-unit building which will not only preserve 13 affordable apartments at this location but produce 53 new affordable units. The new Shepherd Park Apartments will consist of 10 efficiencies, 34 one-bedroom, 2 two-bedroom units, and 20 three-bedroom apartments reserved for residents earning 30-60 percent of area median income. Thirteen of the building’s units will be designated Permanent Supportive Housing (PSH). The new development will also have two market rate two-bedroom units.

Property amenities at Shepherd Park Apartments will include a green roof, bike storage, along with a club and fitness rooms. The development will also include a 92 square foot office space for the on-site PSH service provider, Community Connections, and will be equipped with a 24-hour monitoring/call system. Planned amenities for the apartments are energy efficient washers and dryers, electric ranges, microwaves, and dishwashers. Shepherd Parks Apartments will be located just north of The Parks at Walter Reed redevelopment, which will further add to the neighborhood’s amenities upon completion.