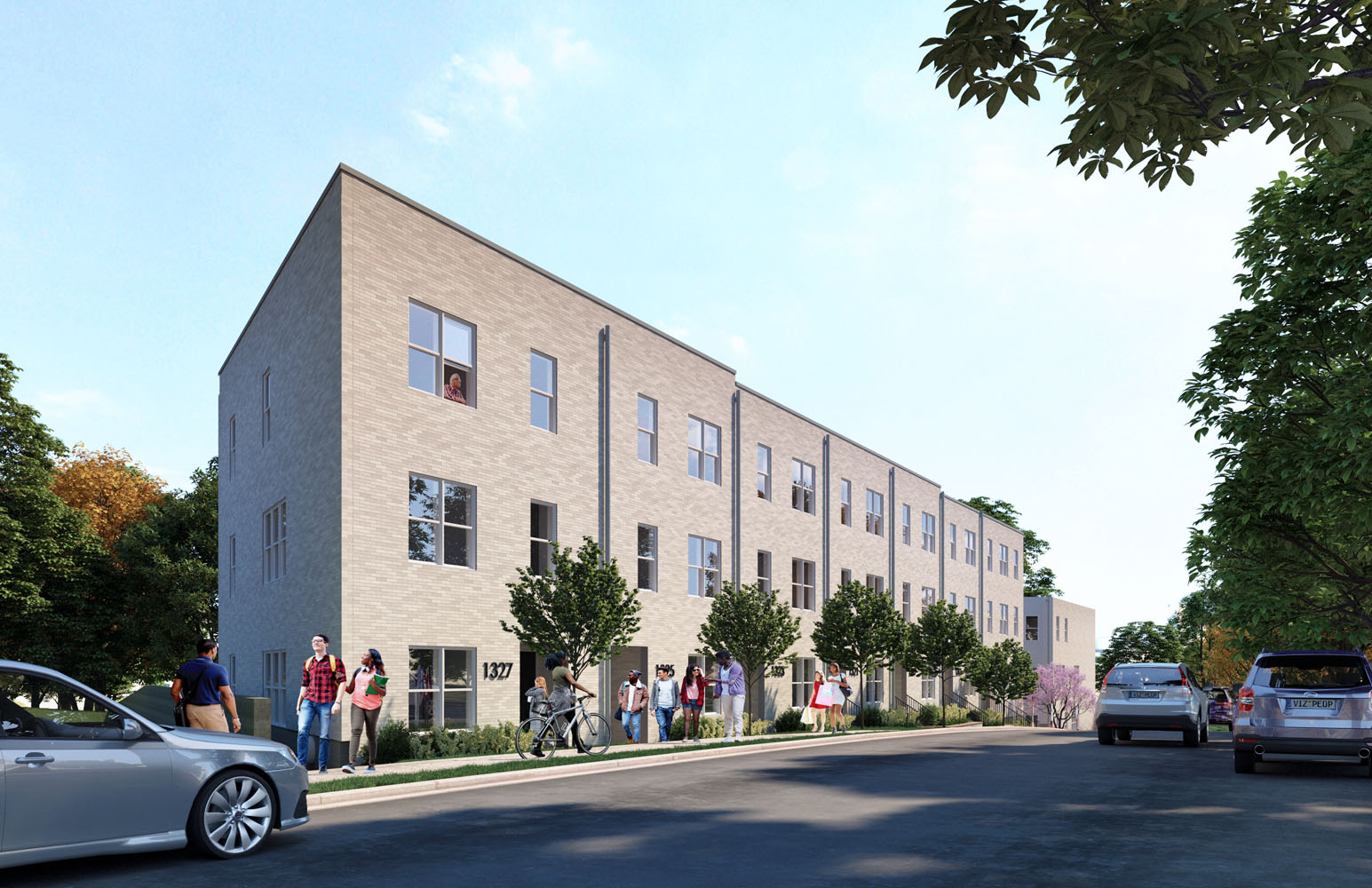 WASHINGTON, DC - The Neighborhood Development Company (NDC) was joined by Ward 7 Councilmember Vincent C. Gray, DHCD's Director Drew Hubbard, and city officials for a ribbon cutting to celebrate the completion of construction on Park27, a new residential community in Hillcrest. Park27 is a collection of 26 brand-new 100% affordable duplex condos and studios, ranging in size from 500 SF to 1,250 SF and delivering much needed affordable home ownership opportunities to Ward 7.

"As a native Washingtonian, I've seen firsthand the dramatic changes in our city that have made it harder and harder for longtime residents to own their own homes. With Park27, we not only wanted to increase affordable housing opportunities within the Hillcrest community, but we also wanted to go further and create an opportunity for families to build intergenerational wealth and security,"said Adrian G. Washington, CEO & Founder, NDC. "With our partners, the DC Department of Housing and Community Development and LISC, we are proud to be doing our part in achieving Mayor Bowser's housing goals."

As part of Mayor Bowser's affordable housing initiative, Park27 adds 26 new homes east of the river. There has been a historic generational gap east of the river in homeownership, and the completion of this project marks new and exciting opportunities for Ward 7 households to create intergenerational wealth. Developed by NDC, Park27 offers a fresh change of pace with homes that have room to breathe and feature high-end amenities. The project will be an Enterprise Green Community / Energy Star Certified building.

"Park27 is possible because of historic investments by Mayor Bowser, a great team at DHCD, and committed partners like NDC, LISC, and The Menkiti Group", said DHCD Interim Director Drew Hubbard. "Together we're turning a formerly vacant lot into an affordable homeownership opportunity for families in Ward 7".

Located just steps away from the corner of Minnesota Avenue SE and Pennsylvania Avenue SE, Park27 is positioned in a desirable location in D.C.'s Hillcrest neighborhood with a wide variety of amenities within walking distance. Within a mile radius residents can enjoy a public park, walking trails, and a commercial corridor with prominent developments like MLK Gateway which offers restaurants, coffee shops, and more. Off-street parking is available on a first come first served basis for residents and there is ample street parking.

"I am thrilled that we are adding additional homeownership opportunities to the Ward.  Park 27 will not only create more affordable housing, this 100% affordable housing project adds value to the District by providing quality affordable homeownership opportunities for Ward 7," said Ward 7 Councilmember Vincent C. Gray. "It is imperative that we continue to move with urgency to also include other basic amenities like full-service grocery stores, sit-down restaurants, and retail amenities, while providing a more diverse housing stock in Ward 7.  Park 27 is a wonderful addition to our efforts to improve the quality of life for Ward 7 residents and bring more neighborhood amenities and quality housing and homeownership options to Ward 7."

Park27 is well situated for direct access to the District of Columbia's strong transportation network, including a "Priority Corridor Network of Metrobus Routes." The site is also relatively accessible to Metro with the nearest Metro station being the Potomac Avenue Metro subway station located on Pennsylvania Avenue approximately one mile to the west. Additional amenities include the Anacostia Art Center, the Smithsonian Anacostia Museum, the Anacostia House, 11th Street Bridge Park, the BIG Chair, Capitol River Front, and Kenilworth Aquatic Gardens.

"With a small area plan underway on Pennsylvania Avenue it's great that we are seeing residential and mixed-use development along the corridor to increase density and help ensure that small, locally owned businesses who come into our community can thrive," said Commissioner Travis R. Swanson. "While I support increased housing density, I strongly believe that it needs to be done responsibly so new developments don't come at the expense of our long-term residents. Affordable housing is a tool that can help create homeownership opportunities while not displacing long-term residents of the community. I'm thrilled to see that this project will offer 100% of their units as affordable units for the community."

Park27 was financed by a combination of a senior loan provided by LISC, funds from DHCD through the Housing Production Trust Fund (HPTF), and private equity. HPTF is the major tool used to produce and preserve affordable housing in the District of Columbia.

"Pennsylvania Avenue is perhaps DC's most famous street, but when on the east side of the Anacostia, it has yet to fully blossom. For years, neighbors have seen these vacant, triangular parcels as symbol of disinvestment. But now they're a jewel. We're tremendously proud to have helped NDC bring Park 27 to life. 26 new homeowners will have a permanent stake in Twining and be able to raise families and contribute to the renaissance of the neighborhoods East of the Anacostia River," said Ramon Jacobson, Executive Director of LISC. "As we celebrate LISC's 40th anniversary, Park 27 represents our ongoing commitment to helping Washingtonians of all incomes to have an equitable stake in the nation's capital."

The sale of all duplex condos and studios at Park27 will be provided exclusively by MG Residential, the residential sales arm of The Menkiti Group, in addition to homeowner education services and all marketing for the project.

"We are proud to celebrate the ribbon cutting and completion of this impactful project and sell these brand-new homes east of the river. As a community-based project that is making a difference towards Mayor Bowser's affordable housing initiative, it's great to partner on projects like Park27 that help advance our commitment to facilitating homeownership," said Bo Menkiti, Founder and CEO of The Menkiti Group. "It's an honor to be the sales team on another new development project to play a role in facilitating affordable homeownership opportunities in a community we have been closely connected to and dedicated to serving for nearly a decade."