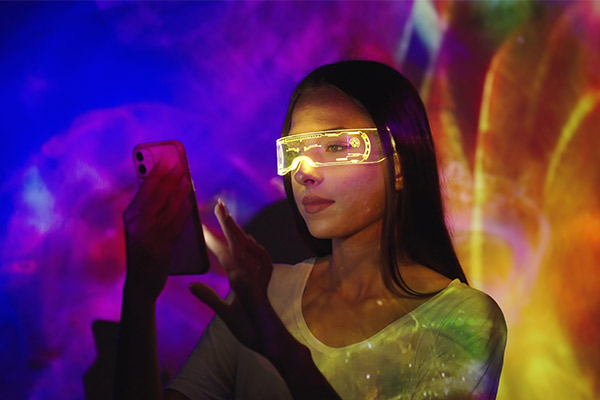 The metaverse has certainly been the new buzzword of late. The metaverse name actually came from the 1992 sci-fi novel – Snow Crash. Plowing through that snow are some big names such as Facebook, which made a big splash recently when it rebranded the company as Meta, signaling where they see the future heading. Microsoft has also joined the metaverse party with its Mesh for Microsoft Teams announcement, which will create a quasi-metaverse capability into its popular video collaboration tool.

The big question is, what is the Metaverse and how do I get there. The actual definition of the metaverse is the merging of various technology elements, including video, augmented and virtual reality, that allow users to exist within a digital world. The metaverse vision is a place where we can all work, play, and stay connected with others. This will range from work events, conferences, virtual vacations, and entertainment events such as live concerts.

To enter the metaverse you need fast broadband internet access for a high-quality experience and a VR headset, such as Oculus. Products in the market like Oculus and Microsoft HoloLens, which are augmented reality goggles, are examples of metaverse products. While next-generation VR gear has become less cumbersome, some users don’t like wearing headgear for extended periods. The headsets are where some improvements will be needed for this to really take off, so look for a ton of innovation when it comes to headsets, this is where we will see next generation smart glasses come back into play.

But make no mistake – this market is booming. The Oculus Quest 2 has sold over 10 million units and has been at number one on Amazon’s best seller list for weeks since its debut. We are also seeing companies such as Accenture, which is one of the largest consulting firms in the world, announce it will acquire 60,000 Oculus Quest 2 headsets for employee training. So, look for companies to find creative ways to leverage the Metaverse. Be sure to keep an eye out for new versions, The Oculus Quest 3 is already in the works, and is said to have a lower price point to entice more users into the metaverse.

Venture capital is pouring into metaverse developers from across the globe, with over $3.9 billion pumped into startups in 2021 alone. But some of the more interesting moves have been in the real estate market. Sales of real estate in the metaverse topped $500 million last year and are predicted to double this year. The sales have been inside what is known as the “Big Four” - Sandbox, Decentraland, Cryptovoxels and Somnium. Leading the charge is Republic Realm who paid a record $4.3 million for land in the largest metaverse real estate platform, Sandbox, where the company is developing 100 islands.

Republic Realm’s development is called Fantasy Islands, featuring villas and a related market of boats and jet skis. Ninety of the islands sold in the in the first day for $15,000 each and some are now listed for resale for more than $100,000. Like the real world, location is everything in the metaverse, as buyers paid a premium to be near Snoop Dog’s metaverse mansion, as the celebrity rapper jumps into partnerships with metaverse developers. This surge is signaling the focus on the metaverse as the new frontier for digital real estate development, with models of buying, selling, and even leasing digital properties.

Beyond trying to lease virtual apartments - can the multifamily housing industry really find a place to leverage the metaverse? Of course, it can, and the possibilities are endless for where PropTech developers can take this. As luxury residential brokers are starting to utilize the metaverse to create new sale channels and make property tours more conversational, so can the multifamily industry. In fact, the easiest place to start would be with offering apartment tours, as most of the market mastered the art of virtual tours over the last two years and already have digital assets to work with.

The metaverse still has a ton of unknowns, but the one known factor is its core will be to create a virtual world, something that can be easily replicated from real-world buildings. We are seeing the metaverse positioning itself for new e-commerce experiences, which opens the doors for technology providers to be able to build leasing platforms, and even in-unit maintenance tools to help ease some of the pain-points of the labor shortage. As multifamily operators have been perfecting their ability to handle task without the assistance of on-site staff, the metaverse opens a world of possibilities.