Groundbreaking Celebrated for The Strand Residences in Deanwood Neighborhood of Washington, D.C. 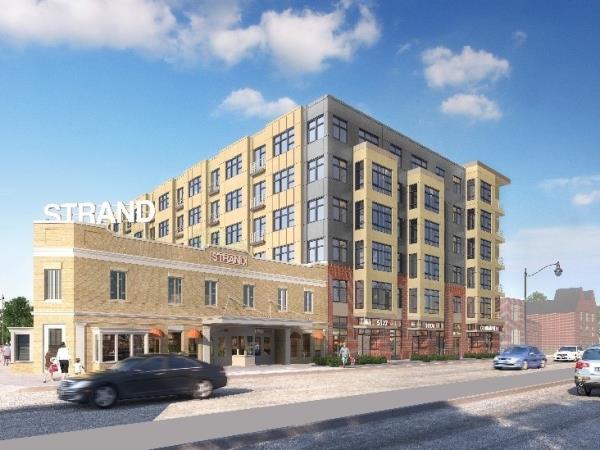 The ceremony included remarks from Mayor Muriel Bowser and Councilmember Vincent Gray, both supported the project for many years. The event, an ice cream social for neighborhood residents and local officials, was held after another local affordable housing groundbreaking at the nearby Providence Place.

“Construction of The Strand Residences, in the making for more than a decade, is being financed by DMPED which is investing $15.6M from the District’s New Communities Initiative, DCHFA which allocated $19.5M of tax-exempt bonds, and DCHA which contributed operating subsidies for 28 units through a Local Rent Supplement Program contract (LRSP),” said Mayor Muriel Bowser. “As well, the tax-exempt bonds triggered an allocation of 4% Low-Income Housing Tax Credits that helped attract a $12.3M equity investment from Enterprise Community Partners.”

In addition to the 86 apartments, the Residences will feature a large multi-purpose room, exercise room, bike storage room, outdoor patio area for grilling, and on-site resident services provided by NHPF’s affiliate, Operation Pathways. The first floor also includes retail space for a neighborhood non-profit and a community-based retailer. Construction is expected to complete in January 2021.

"The Strand Residences boldly underscore NHPF’s mission to provide quality affordable housing that’s ‘more than a roof’,” said NHPF CEO and President Richard Burns. “This service-enriched property will bring about positive change for the community and its residents for years to come.”

Added TWG President Warren Williams, “After twelve years of effort by The Warrenton Group, the local ANCs and Lincoln Heights New Communities Resident Council, neither residents nor local businesses were displaced for this project which is critical to preserve a community while still increasing value for Ward 7. Partnerships with local leaders such as Pat Malloy and local resident Councilmember Vince Gray were instrumental in developing the New Community Master Plan its successful materialization. The Strand really is evidence that ‘teamwork makes dreams work’.”

The Strand Residences will be built on land that was contaminated by Volatile Organic Compounds (VOCs) and prevented its redevelopment for years. To ensure proper remediation of the brownfield, the Development Team entered the District’s Voluntary Clean-Up.

“With the Strand, as well as Providence Place development nearby, it is heartening to have these new affordable housing options in our community,” added Pastor Stephen Young of WMCDC.

The Residences is next to the Strand Theater, a storied local historic landmark that the Development Team plans to convert into a new restaurant in 2020.

PGN Architects is the architect of record. Bowman Consulting provided civil engineering, landscape design, and surveying services. WCS Construction is the general contractor and WCS Property Management will be the property manager. The Development Team is committed to spending at least 35% of the project’s funds on products and services provided by Certified Business Enterprises. WCS Construction is committed to meeting the District’s First Source hiring requirements.

Once complete, the Residences will include 71 one-bedroom apartments and 15 two-bedroom units. The 28 LRSP units will be rented to residents who earn less than 30% AMI and will be reserved for residents relocating from the nearby Lincoln Heights and Richardson Dwellings properties.