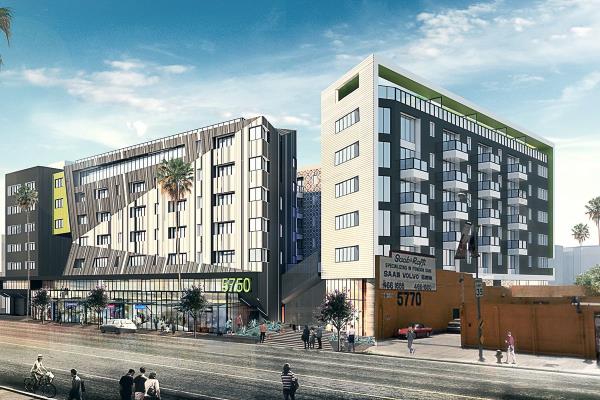 HOLLYWOOD, CA - Wood Partners, a national leader in real estate development and acquisition, announced that construction has begun on a new property in Los Angeles.

Located at 5750 Hollywood Boulevard, the new community is situated two blocks from the nearest Metro station, providing easy access to the employment centers, entertainment, nightlife and other amenities that Hollywood has to offer. Wood Partners once again delivers their signature best-in-class living elegance to this project, which follows the highly-successful opening of The 5550, just blocks away.

"The success of The 5550 has proven that providing stellar amenities and modern living in a sought-after location close to transit is a winning strategy," said Brian Hansen, Senior Managing Director of Wood Partners' Western Region. "We expect to replicate that success with 5750 Hollywood and more projects like it moving forward. Hollywood is experiencing some of the largest employment booms in Southern California, and we are effectively poised to move quickly and strategically to take advantage of the opportunities in this market."

Readily accessible to notable employers like Netflix, Viacom, TBS, CNN and NeueHouse, 5750 Hollywood connects residents with contemporary living, in a vibrant, dynamic neighborhood steps from Hollywood icons. The 161-unit building will feature state-of-the-art finishes and sought after amenities, including a roof deck, courtyards, and a full gym.

"5750 Hollywood is the second large-scale, multi-family development project to begin construction in East Hollywood, and the third development for Wood Partners in the area," said Joe Gambill, Wood Partners' Vice President of Development, Southern California. "We believe in the long-term success of Hollywood and are excited to be ground-floor investors in the revitalization of the area."

The housing community at 5750 Hollywood Boulevard is scheduled to open in July 2020, with pre-leasing beginning in June 2020.