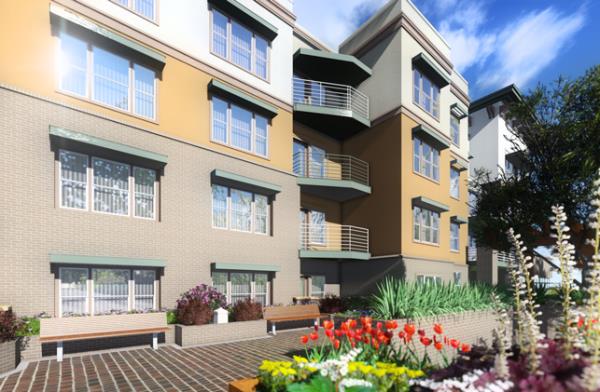 “This project was a great fit for us,” says Bruce Lofgren, vice president, the Mechanics Bank lender who led the bank’s involvement. “We already have a major commitment to help create affordable housing in Richmond and in this case, we had the privilege of working with an experienced and respected affordable housing development firm that specializes in developing and operating LIHTC properties in California and other western states. Our ability to understand the complexity of the financing structure and our involvement in the City of Richmond made Mechanics Bank the best choice for financing this project.”

The four-story, elevator-served, wood and steel frame structure contains 62 apartment units, including 50 one-bedroom units and 12 two- bedroom units (including a manager’s unit). Other project improvements include a community room, laundry room, manager’s office, elevator lobby, storage areas, three reading lounges, craft room, fitness room, and a community garden area. With the exception of the manager’s unit, the apartment rents are affordable to senior (55+ years old) households with incomes at or below 50% and 60% of the area median income as published by HUD.

Lofgren, a 30-year veteran in real estate finance who spent about 13 years in the community lending group at Bank of America before joining Mechanics Bank in 2005, says, “This project fills a demonstrated need in the Richmond community and offers many other benefits as well. It was built on a dilapidated industrial site that was an eyesore and was bringing down property values in the area. With high quality new construction there now, property values have the potential to improve and the whole neighborhood will be affected positively.”

Mechanics Bank also recently purchased $3 million of Social Impact Bonds that Richmond Community Foundation (RCF) will use to acquire, rehabilitate and sell blighted homes throughout the City of Richmond. It’s the first time SIBs have been used for this purpose.