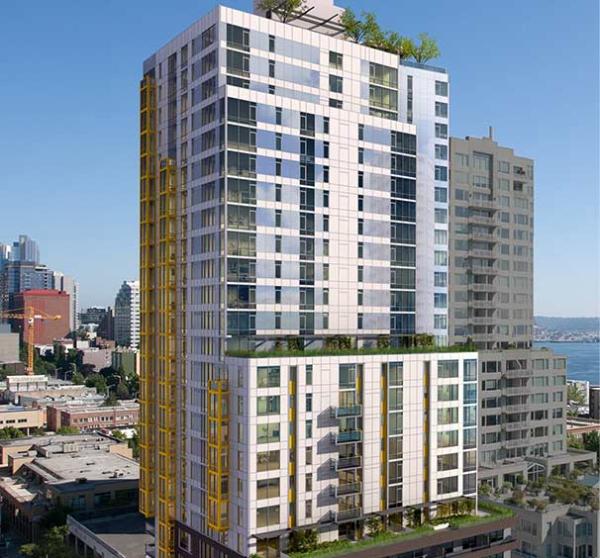 SEATTLE, WA - One of the most popular high-rise apartment buildings in downtown Seattle is now for sale according to developer, Wood Partners. Dimension, which opened in the Fall of 2014 on the corner of Cedar and 3rd in Seattle’s Belltown neighborhood, is now over 80% leased after just seven months on the market.

“Through a combination of big data and personal interaction with cultural luminaries in Seattle, we concluded that the most valuable product would respond to downtown residents’ desires for self-actualization, self-expression, and making a contribution.”

“Dimension is the best example to date of what our team can produce through an integrated approach to development, where we engage marketing, design and operations in a process of research and development, much like many of the top companies developing products outside of our industry,” said Frank Middleton, Western Region Development Director for Wood Partners. “This approach has clearly met local demand for the experience of being connected to something genuine, local, creative and cultural – a scarce yet valuable recipe in multifamily development.”

Dimension, designed by Hewitt Architects of Seattle, is comprised of European-style studio, one- and two-bedroom apartments with stunning views of downtown Seattle and the Puget Sound. Dimension is located within walking distance to major technology employers Amazon.com and Microsoft. What makes the building stand out is the Ground Floor Project, a cultural program geared at infusing the arts, music, food and other cultural elements of Seattle into the community. The Ground Floor Project is an unusual connection between the residents of Dimension and the facilities inspired by the physical form of the building itself, which was evolved through collaboration with the neighborhood and some of the region’s most well-known artists and musicians, according to Middleton.

“Seattle is a market where we saw tremendous opportunities to connect with the unique side of a city that is quickly evolving into one of the greatest success stories of this generation,” said Jonathan Yarnold, Senior Vice President of Marketing for Wood Partners. “Through a combination of big data and personal interaction with cultural luminaries in Seattle, we concluded that the most valuable product would respond to downtown residents’ desires for self-actualization, self-expression, and making a contribution.”