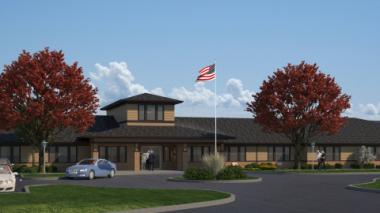 CHICAGO, IL - Anthem Memory Care, which owns and operates assisted living communities for people with memory loss in the U.S., has been approved by the Village of Burr Ridge, a Chicago suburb, for construction of a 40,000 SF community that will accommodate up to 76 full time residents at 15W150 South Frontage Road. Anthem will begin construction on the estimated $12M development in September. Upon completion, the community will employ approximately 50 full-time equivalent employees. Anthem’s plans for the community were approved at the bimonthly meeting of the Mayor and Board of Trustees on Monday, July 14.

“We are thrilled to earn the support of Burr Ridge and its approval of our memory care community. We intend to set the standard for the care of Alzheimer’s and other dementia in the region for residents, their families, employees, and the community,” said Isaac Scott, principal, Anthem Memory Care. “We have carefully analyzed the market and determined a clear need for stand-alone memory care in Burr Ridge, and expect this is the first of several communities we bring to Chicagoland.”

Anthem is targeting July 2015 for the Burr Ridge community’s opening. Its contractors include CB Two Architects, The Adair Group, general contractors, and the Woolpert Inc., civil engineers. In addition to Illinois, Anthem owns and operates communities in California and Colorado.

“We are very pleased that Anthem Memory Care has chosen Burr Ridge for one of their next Alzheimer’s communities,” said Mayor Mickey Straub, the Village of Burr Ridge. “Our enthusiasm is further fueled by knowing that it will complement and complete the other medical facilities existing in the village, and seeing how well they worked with the community development department. And being a patriotic guy, I can’t help but also like their name, Anthem, which is a song of praise, devotion or patriotism.”

Anthem is currently under contract for two additional purchase and sale agreements in Chicago including Tinley Park, at 17833 S. Harlem Rd., and Glenview, at 1879 Chestnut Ave. It is pursuing as many as seven locations that will serve Chicago and its communities. Michael Prost, senior vice president, Lee & Associates, is representing Anthem in its transactions.