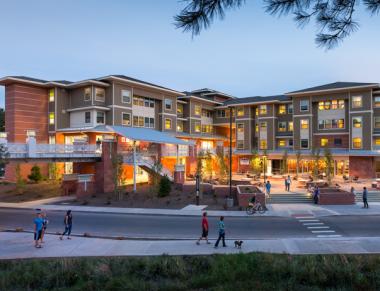 AUSTIN, TX - American Campus Communities, Inc., one of the largest owners, managers and developers of high-quality student housing properties in the U.S., announced that the company has commenced construction on a 328-bed residence hall community at Northern Arizona University (NAU) in Flagstaff, AZ. The $19.3 million on-campus expansion, undertaken under the company’s American Campus Equity (ACE) program, is an extension of The Suites, a 550-bed community centrally located on campus that was fully leased by April in its initial occupancy in 2012. The community is anticipated to open for occupancy in August 2014.

"We are pleased to partner with Northern Arizona University once again as we expand The Suites community to provide much needed housing for its students,” said Jamie Wilhelm, American Campus executive vice president of public-private partnerships. “Our ACE investments at NAU represent excellent examples of how private equity investment in on-campus housing can assist universities in meeting growing demand in an expeditious manner without any negative impacts to their balance sheet.”

Northern Arizona State is the third-largest university in the state of Arizona and is home to 18,990 students on the main campus. The University has experienced a 24 percent growth in total enrollment over the past five years, and plans to continue growth in the years to come, which supports the burgeoning demand for additional on-campus housing.

American Campus currently owns and operates two on-campus assets at Northern Arizona State containing 1,126 beds, The Suites and Hilltop Townhomes, both of which opened fully occupied in fall 2012. The communities are fully leased for fall 2013.

The second phase of The Suites is a modern residence hall offering suite-style, fully-furnished units that will include cable television, internet, and all utilities. Within each of the two four-story buildings, every two residential floors share a two-story neighborhood amenity space that provides residents with day-to-day facilities including laundry, kitchenette, study rooms, and social lounges for residents to congregate. Phase II will also share the 12,428 square-foot community center built during Phase I.